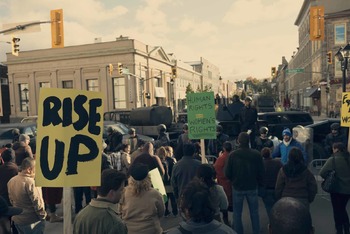 "Just... a really long time ago, when men used to tell women what do to a lot. And then there was suffrage, which is a good thing, but it sounds horrible."
— Phoebe, Friends, "The One Where Joey Moves Out"
Advertisement:

Suffrage is the right to vote in political elections. In fiction, it describes the process of freeing a group of people from the control of somebody else. In Fictionland, we often meet various groups that try to liberate themselves. The right to vote might be restricted to one group only. Characters who are sick of being treated like second-class citizens have had enough. They begin to demand equality, manifested especially in their right to vote. Racism or mistreatment of the poor and socialism may (or may not) be the cause.

The protests might be peaceful at first, discussing ideas with opposing parties, holding public lectures, writing essays and publishing books. They might carry placards and hand out pamphlets or organize rallies. Later, it may erupt into civil disobedience like acts of vandalism or attacking politicians. The campaign might become quite militant and violent. Some will want to commit a Heroic Sacrifice and become a martyr for the cause.

Fiction that reflects Real Life will often portray the women's suffrage movement. It especially concerns their campaign in the western world in the late part of the 19th century and in the early part of the 20th century. Another major campaign to get suffrage refers to African Americans in the USA.

This Worldbuilding trope however includes also variants and concepts like Fantasy Counterpart Culture, Recycled IN SPACE! and Constructed World. It might be men who are the diminished group under the matriarchal political system. Or perhaps there is a race of creatures or beings that are treated poorly if Fantastic Racism is at play. It could even be nonliving things that revolt, such as robots. Might overlap with Zombie Advocate.

See La Résistance for a group that tries to gain independence or change things profoundly, usually manifested by overthrowing oppressors, establishing a new regime or forming a new state.