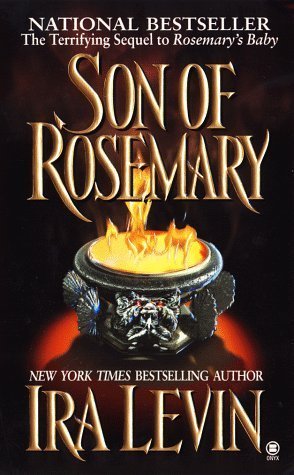 Son of Rosemary is a 1997 horror novel by Ira Levin, and is the sequel to Rosemary's Baby.

The last thing Rosemary Woodhouse remembers is trying to escape the Bramford to save her seven-year-old son Andrew from the grips of a Satanic cult that planned to rear him as the Antichrist and use him to conquer — or destroy — the world. The year was 1973.

She awakes abruptly in a long-term care facility, a mystery patient with no name, in 1999. Her coma was caused by the cult and ended the moment its last member died. Desperate to learn what became of her son, she discovers that he has become the charismatic founder of a wildly successful world-wide charitable organization that has managed to nearly eradicate hunger, poverty, and disease. Mother and son are reunited, and Rosemary herself achieves celebrity as the long-lost mother of the most beloved and respected public figure in modern history. Rosemary feels relieved that Andy has successfully cast off his diabolical lineage and devoted his life to achieving world peace.

And then, on New Year's Eve at the dawn of the new millennium, everything goes horribly right.

Published thirty years after its predecessor, and the final published work of its author, the book was considered a critical failure and a disappointing ending for both the author's career and the well-respected original, with some critics wondering aloud if the sequel might have been a Contractual Obligation Project meant for the author to retain control of his intellectual property before the publishers contracted a ghostwriter to create an unwelcome sequel for him. In any case, the ending of Son of Rosemary so radically alters the events of Rosemary's Baby that many fans of the original work prefer to pretend the sequel never happened.