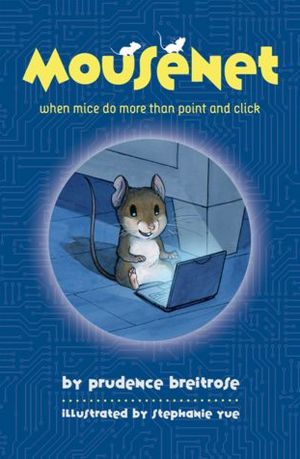 Mousenet, subtitled with "When Mice Do More Than Point and Click," is a 2011 children's fiction book, written by Prudence Breitrose, with illustrations by Stephanie Yue, published by Disney Hyperion. Per the author, the book was inspired by a dream of hers in which computer mice became mixed up with real mice. In the story, the human invention of computers has allowed mice to evolve, allowing them to create their own Internet society and develop their own form of sign language. The events of the story are set in motion when the main human protagonists' uncle invents the "Thumbtop," the world's smallest computer. Thus begins their mission: to make contact for the first time ever and begin mass production of the Thumbtop, a device that is not practical for humans, but is just the right size for mice. To do this, however, they must first win the trust of Megan Miller, a girl that until recently had been living in the wild, the niece of the inventor of the Thumbtop.

that is worked into the book itself, and a sequel, Mousemobile, was released in 2013. Subtitled "When Mice Hit the Road, the publication information inside describes it as being "A Mousenet book." In this book, the mice are forced to hit the road after a possible betrayal from within.