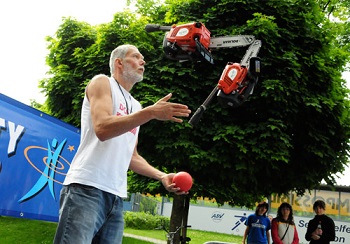 While it has been done,

in Real Life chainsaw juggling is unusual even for highly skilled professional jugglers who want to add the spice of danger to their act. But it's much more common in fiction — want to take that juggling act to the next level? Just add chainsaws!

A common yet very dangerous trick that is often performed at sideshows and circuses. It is typical for someone of exceptional bravery to juggle chainsaws while the chainsaws are running. In Western Animation, expect a character to appear fine for a minute before literally falling apart or to fall through a hole in the floor that was caused by the chainsaws.

Of course, chainsaws aren't the only dangerous things that can be used in juggling. People can also juggle flaming torches, tasers, and swords, which makes this trope Truth in Television.

Not to be confused with Juggling Loaded Guns, which is more about comedically reckless gun usage than juggling per se. Though if one were, in fact, to juggle loaded guns, that would indeed be an example of both tropes.

For a character who fights by making sharp objects fly around, see Master of the Levitating Blades and related tropes.