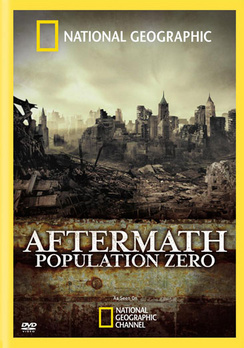 Aftermath, premiering as Aftermath: Population Zero was produced in Canada, but premiered on the National Geographic Channel. Its titular premise is a hypothetical scenario of what would happen if all humans suddenly vanished without a trace. Eventually, more follow-up episodes were produced based on the same concept of coming up with a hypothetical scenario, doing copious research into what exactly that change to the status quo would impact, and then filming an episode the occurrence of the scenario as well as its aftermath.

Not to be confused with the 2016 Space Channel series.

Humans, as a species, have existed for a relatively short time in Earth's history and are still relatively young compared to certain other species. Yet of all species that have walked the earth, humans are unique in that we are the only species known to have created lasting structures and buildings and to have had a lastingly massive impact on the earth's ecology. However, on June 13th of an unspecified year, all humans have vanished without a trace for no explicable reason. Population Zero then details what has happened to the artifacts that humans have left behind after the long years without usage or maintenance, as well as what happens to the earth's ecology after humans have been removed from the equation.

Red Giant/Swallowed By the Sun

The sun is a star and, like all stars, is aging. It will eventually turn into a red giant, but is currently a yellow dwarf and our sun that is the center of our solar system, the thing that makes our existence possible, and an object we see everyday to the point where we simply take it for granted. This episode posits a hypothetical scenario where the sun ages millions of years overnight and rapidly ages into a red giant at an accelerated rate.

Advertisement:
When the Earth Stops Spinning

This episode is unique among the episodes of Aftermath in that nothing happens specifically overnight. The Earth's rotation is already slowing, though at such a low rate that it's barely even measurable. It's just that one day, right out of the blue, this slowing starts to accelerate to the point where the Earth stops spinning entirely 5 years after the start of the earth's rotation's accelerated deceleration. This was probably done because if the Earth did stop spinning in an instant, everything on the surface would be thrown eastward at more than a thousand miles per hour.

It is a fact that in the last two centuries, the world population has increased at a much faster rate than in all of human history. As the world population count has gone through each billion mark, it has been increasingly more often that the question of just how many people can the planet support has been raised. Because of issues of poverty in certain areas and segments of the population, there is also the question of just how many can live an adequate life without draining the planet's resources. Population Overload exploits this hot topic, especially the fact that the world would soon hit the seven billion mark at the time of production. This episode presents the fact that the world's population is presently roughly 7 billion and then postulates what would happen if the world population suddenly doubled overnight to 14 billion.

The oil crisis is currently a hot topic and the fact that there is only a limited amount of fossil fuels to drill has been a point that many politicians have repeatedly mentioned. Therefore, this episode was produced, postulating this question: "What would happen if the world's remaining oil reservoirs suddenly disappeared?"