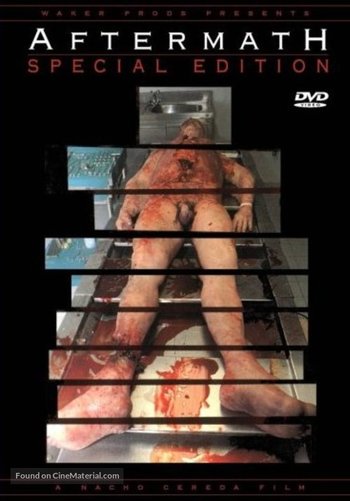 Aftermath is 1994 horror short film created by Nacho Cerdà. It forms a loose trilogy with two of Cerdà's other films, The Awakening and Genesis.

A woman named Marta Arnau Marti is caught in a fatal car crash involving a dog, and her body is shipped to the morgue, where two morticians are working on a pair of male cadavers. After his companion finishes up and leaves, the other worker takes Marta's corpse out of its drawer. The mortician proceeds to masturbate while mutilating and eviscerating Marta's body, which he takes pictures of, eventually becoming so overcome with lust that he mounts the corpse and has sex with it, while its chest is still cut open. Afterward, the man cleans up, seals Marta, and takes her heart home, where he blends it so his dog can eat it. The dog eats the heart while his owner watches television, and the camera zooms in on Marta's obituary, which happens to be among the scraps the dog's bowl is set on.

And that's it, really. Well, aside from the complete and utter lack of any dialogue, and the occasional outbursts of intense music.