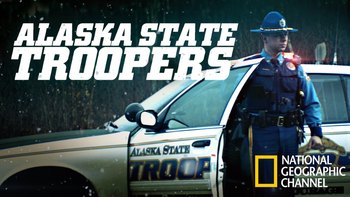 In Honor, there is Hope.

Alaska State Troopers is a reality TV program similar to COPS, filmed by National Geographic and set in Alaska.

Premiering on October 14, 2009, the show ran for seven seasons until the state government pulled the plug on the series, considering it a distraction to the troopers' work; the final new episode aired on April 15, 2015. The entire series run is available on DVD, as well as re-runs airing on the National Geographic Channel to this day. Alaska State Troopers focuses on the interactions of Troopers and the public. In the first season parts of several episodes also focused on the Anchorage and Fairbanks police departments. In addition Village Public Safety Officers are shown several times each season.

Much like the TV show COPS, segments often start with complaints, transition to brief investigations, and end with arrests of suspects. The show also follows some of the more unusual policing tasks in Alaska, such as dealing with vast distances and investigating dead moose. Locally in Fairbanks, the show is sometimes referred to "Alaskans behaving badly".