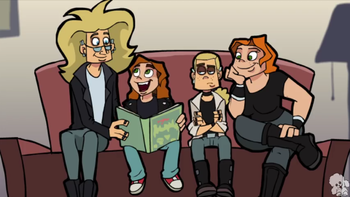 Metal Family is a series of animated shorts about a Russian Family, consisting of Masculine Girl, Feminine Boy dad Sebastian "Glam", biker wife Victoria, and their children, the Deadpan Snarker "Dee", and Heavy. The series follows the family's creative ways of dealing with everyday problems in a slice-of-life manner.

The series is Russian, but gets English subtitles applied sometime after the episode's release on YouTube, under a channel of the same name. Its pilot episode/music video "The Story ain't Over" (sung by Avantasia) has been surfing around the web for a while.

An official English dub will be released here