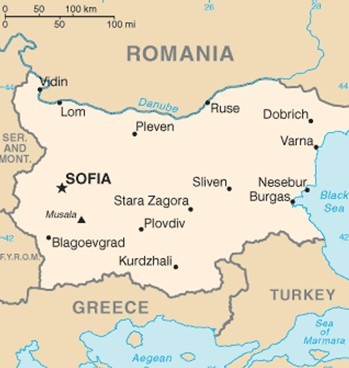 Bulgaria (Bulgarian: България), officially the Republic of Bulgaria (Bulgarian: Република България Republika Balgariya), is a Eastern European country located at the south-east corner of Europe, on the Balkan Peninsula. Its inhabitants, the Bulgarians, speak the South Slavic language Bulgarian.

During the Classical period most of modern day Bulgaria, as well as Northern Greece and Western Turkey, was occupied by the Thracian people. The Odrysian Kingdom attempted to unify Thrace as a political and military force, but they were unable to resist the dominance of - at varying times - Greece, Macedonia, and Rome.

-speaking, or perhaps Turkic-speaking with a strong Iranian influence; this is tied up with both recent research and the uncomfortable recent history of the Bulgarians and Turks. Most likely it was Turkic nomadic horsemen from somewhere in Central Asia, and they stayed a while in the Ukraine before scattering. Most went to modern Bulgaria and entered an alliance with some Slavic tribes, intermixing until the two peoples were one ethnic group with one Slavic language who were called Bulgarians (a bit like how Rus' nobles of Nordic extraction gradually went native as the Kievan Rus' evolved into the Eastern Slavic nations we know and love today, namely Russia, Belarus, and Ukraine). Other Bulgar groups lived along the Volga until being destroyed by the Mongols (the Russian Tsars liked to call themselves Tsars of Volga Bulgaria as part of their long list of titles), and may have given their name to the Balkar people of the northern Caucasus; the Volga Tatars of today claim descent from the Volga Bulgars.

Medieval Bulgaria was a huge empire ruling much of present-day Romania, Serbia, and Greece, but it fell to the Byzantine Empire and was revived a lot smaller (but considerably bigger that it is now) until the Ottomans took over and ran the place for the next five centuries, leaving as their legacy Oriental architecture, a Turkish minority, and a Bulgarian Muslim "Pomak" community.

Bulgaria remained under Ottoman rule, but by the mid-19th century national revivals were springing up all over Europe. First Serbia became autonomous, then Greece independent, then Italy and Germany unified into single nations. The Bulgarians thought that it was high time they got their chance, and rebelled in 1876. After the rebellion was brutally crushed even the traditional rivals of the Russians, the British, refused to help the Ottomans. The Russians, eager to weaken Turkey, intervened, beginning the "War of Liberation", in which Russia promised Bulgaria a vast state that would take in all territories where Bulgarian people lived. The European Great Powers were less enthusiastic and reversed most of Bulgaria's gains, dividing it into an Ottoman province with almost total self-rule but little territory and another province ruled by an Ottoman governor.

The Ottomans carried right on weakening, however, and in 1885 they were unable to stop the two halves re-uniting, sort of. Both halves would continue their notional existence, but the autonomous prince of one would always be appointed governor of the other. Serbia, however, was not keen on this idea and attacked. They got owned pretty badly by the Bulgarians, who call it the "War of Captains Against Generals" because all their officers above the rank of captain were Russians hired to train their new army and were withdrawn at the outbreak of hostilities.

In the First Balkan War, Bulgaria and Serbia (and Montenegro and Greece) put aside their disputed to fight the Turks, but soon fell out over the spoils. Trouble was that Bulgaria and Greece didn't have an agreement on how to divide the conquered territories, while Serbia with which Bulgaria did have an agreement refused to honor it. Bulgaria wanted most of Macedonia which would leave Serbia and Greece with little. So the two allied against Bulgaria and when Bulgaria attacked them, Romania and the Ottomans also jumped in. When the dust cleared Bulgaria had lost badly and ended up losing a lot of land, including territories which were clearly Bulgarian.

Bulgaria was, rather understandably, a bit miffed, and when the crisis came in 1914, they leapt to the side of Germany to restore what was lost. Well, the king and government did. Although they kept up the fight, many Bulgarians saw Russia as their Big Bro and weren't enthusiastic about fighting on the same side as Russia's enemies (though when the Russians sent troops against Bulgaria, they were defeated rather quickly). By 1918, Germany had assigned considerable territories to Bulgaria, even more extensive than the borders of '78 and certainly not wholly based on Bulgarian ethnicity. But, of course, the Entente Powers won and Bulgaria lost even more territories.

In 1941, Bulgaria was again reluctantly dragged into Germany's war in search of revenge, and again it paid the price: Bulgaria was actually allowed to keep some territories it was given by the Nazis (which were ethnically Bulgarian and still part of Bulgaria today), but this was hardly worth being stuck in Commie Land for the next few decades. In the USSR at the time Bulgaria was sometimes informally referred to as "the sixteenth Soviet Republic", because out of all the communist parties of the Eastern Bloc Bulgaria's was considered the most obedient to Moscow. It's worth noting that commie Bulgaria was one of the better economies of the East Bloc. It managed to successfully collectivize its agricultural production, succeeding not only to avoid the horrible famines of Mao's and Stalin's regime, but also to significantly increase its agricultural output. Bulgaria was also rather popular as a holiday destination for people living on the other side of the Iron Curtain (the skiing in the mountains and the warm Black Sea resorts being the main attraction).

Meanwhile, those people who had historically always been thought of as Bulgarian but who lived in territory gained by Serbia during the Balkan wars were developing their own national consciousness: Macedonism - according to most Bulgarians, against their will.

With the end of Commie Land (though the communist party, who renamed themselves the "socialist party" managed to hang on to power a few more years), Bulgaria became a democracy (notably electing their former Tsar, Simeon

, as Prime Minister: he didn't do too well, is doing better as an elder statesman, and they decided not to bring back the monarchy anyway). Also, in 2007 Bulgaria joined The European Union. However, the country still has problems: internally, corruption, crime, and poverty, externally its relations with the now-independent country now known as North Macedonia. These are cordial, but Bulgaria refuses to acknowledge that Macedonian is a different language. This is decidedly not what North Macedonians think.

Bulgaria is a predominantly mountainous country and its coast on the Black Sea has long been a favourite beach destination in Eastern Europe. It has decent skiing areas, and is becoming more popular as a budget ski destination.

Bulgaria's footballers enjoyed a period of success in the early-mid 1990s, with a fourth-place finish at the 1994 World Cup, qualifying at the expense of highly-rated France and knocking defending champions Germany out in the quarter-final. Bulgaria has continued to produce high-quality players such as former Manchester United striker Dimitar Berbatov, but the team as a whole have not come close to repeating their previous success.

Bulgaria does not often appear in Western media, except as an interchangeable Commie Land location or mysterious homeland of swarthy villains (such as in the first James Bond novel). Traditional Bulgarian singing appears as background music for many movies and TV shows (Xena: Warrior Princess is a prominent example) - and recordings

of Izlel e Delio Haidutin were included on the golden records carried by the Voyager probes into interstellar space. In Britain, Bulgaria remains synonymous with poisoned umbrellas, after a well-publicised incident in The '70s when a dissident was knocked off by a Bulgarian agent in London by this method.

One of the things Bulgarians are well-known for, at least in Central and Eastern Europe, is that their head gestures for "yes" and "no" are reversed, shaking one's head means "yes" and nodding means "no". This is not entirely accurate, since their "nod" is upward instead of downward and the head shake is not completely horizontal, but slightly wavy. Also, with the last two decades' increase in the exposure to Western media, the traditional Bulgarian gestures are no longer prevalent and the younger generation has largely abandoned them.

Bulgaria as portrayed in media: 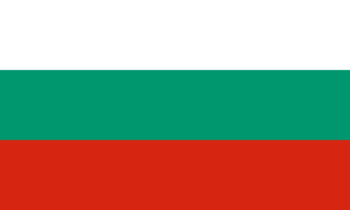 The flag looks like it was inspired by the Pan-Slavic colors (except replacing blue with green), but it developed independently (and in fact green appeared first).
Coat of arms of Bulgaria 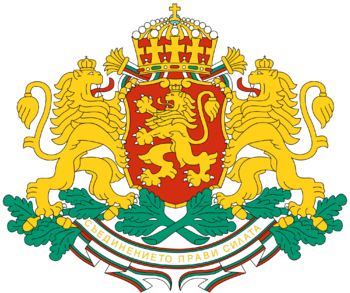