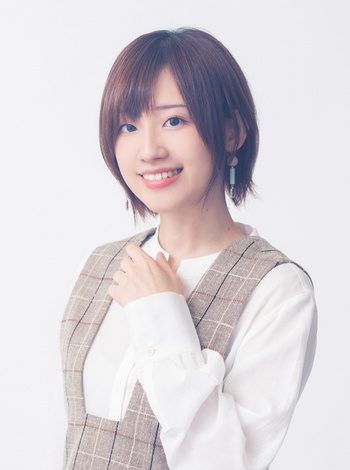 Rie Takahashi, born on February 27, 1994, is a popular seiyuu. She has already played a number of diverse roles, but at the moment her main role is playing gentle and innocent girls, as well as feminine boys in several titles. Additionally, she also tends to get the role of an underclassman of someone else, so expect the phrase "senpai" to come out a lot from her mouth. Her most famous roles are Emilia and Megumin, both played in 2016, and later on, Mash Kyrielight (after taking it over from Risa Taneda)

Has a Relationship Voice Actor with Inori Minase, with which they played close friends twice and once as love interests to the main character. She also hosts the radio show named ShigoHaji Radionote Short for 'Shigoto de Aenai kara Radio hajimemashita', translated into "Since (we) can't meet at work, we started a Radio." along with another good friend of hers, Reina Ueda.

Heh... these are Rie Takahashi's Earth-Shattering Kaboom-surpressing MAGIC roles! Any of these roles is enough to be a Star-Making Role!

Click... Click... Huh!? I'm fine. I wasn't clicking on the index below. I totally wasn't.
Um, no, but are these all your Star-Making Role?
Well, that was a lie. I just said that to look cool--ACK!! I'M SORRY! PLEASE DON'T VANDALIZE MY ARTICLE! STOP! STOP IIIITT!!!