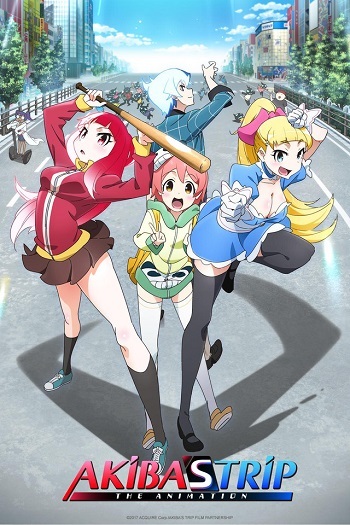 Akiba's Trip: The Animation is an anime adaptation of the video game series of the same name, made by GONZO (commemorating the studio's 25th anniversary) which began airing on January 4, 2017

. Though based around the same general premise, the actual plot and characters are completely original from any of the games.

Tamotsu Denkigai is an average teenage nerd enjoying a normal day in Akihabara. However, there have been unsettling rumors going around of the Bugged Ones, mysterious creatures that have been attacking people all around Akihabara. He soon learns that those rumors are all too real, after getting caught up in a bizarre series of events involving them and a mysterious girl with super-human fighting ability named Matome Mayonaka.

Eager to find out more, he learns that Matome is fighting the Bugged Ones, who are possessing people to turn them into an army in to take over Akihabara. This curiosity nearly costs him his life, but he is saved by Matome through a ritual that gives him powers like hers. Now they and their friends must fight together to stop the Bugged Ones' plans and save Akihabara.

The first trailer for the series can be seen here

. It's licensed for streaming on Crunchyroll and Funimation. Notably, Funimation's simuldub premiered on the same date as the Japanese broadcast, only 30 minutes after the Japanese episode

Has a character sheet here

This anime contains these following tropes.