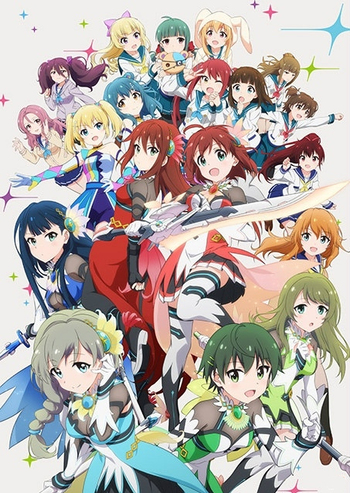 Battle Girl High School was an Action-RPG developed by COLOPL for smartphone game, released on both Android and iOS and shut down on July 31, 2019. You took the role of a new teacher assigned for the Hoshimori Class with the purpose to teach, train and forming the trust with the girls to fight against the threats. The game also supported real-time multiplayers with both PvP 'sport' game and Co-op against giant enemies.

Set in the year 2045, the world has been contaminated by Irousu, and humans find themselves restricted and contained, whom many were forced to leave their planet and building colonies in other nearby planets. Standing boldly against these invaders are ordinary girls everywhere, without a powerful army or even weapons.

The Shinjugammine Girls Academy is a school for these "Hoshimori" (Star Guardians) destined to fight the Irousu. The player is assigned to this academy to train the girls and take back the contaminated Earth. And so, once again, the chimes echo through the sun-strewn schoolyard to mark the beginning of classes today…

An anime adaptation by SILVER LINK. aired in the Summer 2017 Anime lineup.

The page is under heavy construction, any help will be appreciated.