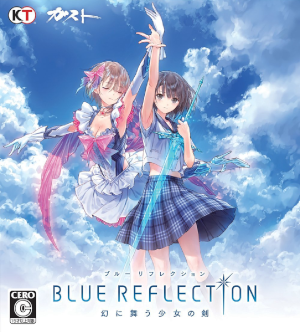 Blue Reflection is a JRPG developed by Gust Corporation, creators of the Atelier series, and published by Koei Tecmo. Set in a Japanese all-girl's school, Hinako Shirai is a high school student and Ballet dancer who seriously injured her leg in a car accident. One year later she returns to school and meets a former classmate who is so happy to see Hinako, her emotions go berserk and Hinako is transported to a realm known as the Common.

There she meets the sisters Yuzuki and Lime who offer her the chance to become a Reflector, a magical girl who fights back against the Sephira, monsters that feed on human emotion. At first she is skeptical but when she is told that defeating the Sephira will grant her one wish she decided to help so she can heal her injured leg and return to ballet.

There's a character page, due to the numerous characters in the game.

with the intent on expanding the IP with three projects. The projects include;