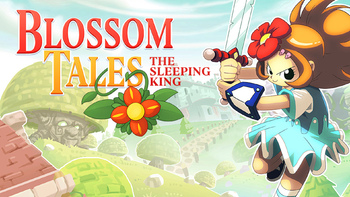 Blossom Tales: The Sleeping King is an action-adventure game released in 2017 by Castle Pixel. Its story follows a young knight trainee who sets out on a quest to wake King Orchid, who was cursed by his wizard brother, Crocus. The narrative is relayed through an interesting Framing Device: a grandfather is telling a bedtime story to his grandchildren. The kids being kids, of course, they can't help but interject and influence the story (and, rarely, the gameplay) from time to time.

The Sleeping King is nothing if not a loving pastiche of (and tribute to) the early The Legend of Zelda games, particularly A Link to the Past and Link's Awakening. It borrows (and, in a couple of cases, directly swipes) attacks, items, and gameplay elements from the series that inspired it. However, it does differ in a few ways: the dungeons are fewer and simpler (though they are much longer), and the gameplay is more focused on combat and solving basic puzzles rather than exploring and navigating complex dungeons.

On September 24th, 2021, a sequel called Blossom Tales II: The Minotaur Prince was announced and was subsequently released on August 16, 2022. Unlike the first game, it was published by Playtonic Friends.