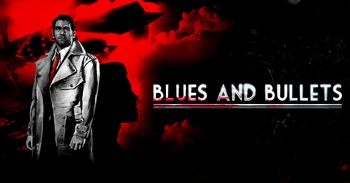 Blues and Bullets is an Episodic Game developed by A Crowd of Monsters. It takes place in an alternate version of the 1950s, where cop Eliot Ness has retired and now works in his own diner, until an old enemy requires his services as a detective. One remarkable feature of the game is the use of only the colors black, white and red.

Blues and Bullets contains examples of: