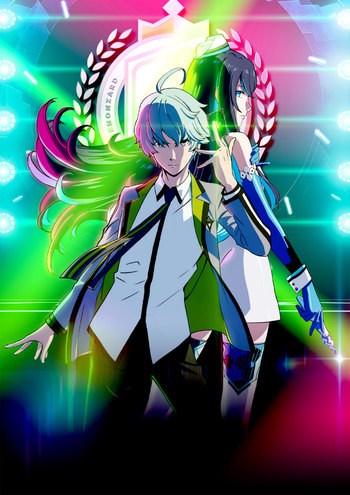 The game begins now.
Many years into the future, the Zenonzard card game has become the most popular hobby all over the world. Zenonzard players, aided by sophisticated AI units called "Codemen", tirelessly compete against each other to earn the right to enter the Zenon, a special dimension that hosts battles between the best players in the world. Sota Azuma dreamed of entering the Zenon and becoming a champion, but that dream faded after enduring a friendless childhood. Fortunately, the arrival of a special Codeman called Eilietta Lash gives Sota the chance to fulfill his dream once again.
Advertisement:

Zenonzard: The Animation is an anime series produced by Studio 8-bit. It is part of the overall Zenonzard media franchise and adapts the Zenonzard card game by Bandai Namco Entertainment. Episode 0 of the series premiered in September 10, 2019, on Zenonzard's official YouTube channel, with television channels broadcasting Episode 0 in September 13 of that same year. The full series premiered on January 2020, with episodes getting released on a monthly basis.