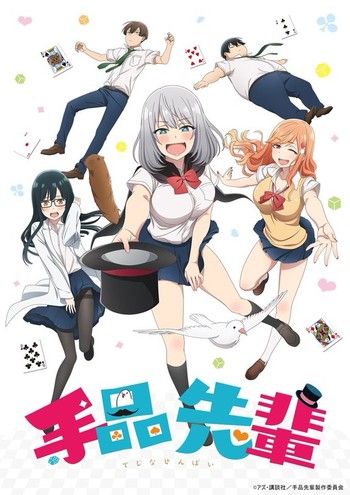 Magical Sempai (Tejina Senpai) is a manga series by Azu. It was serialized in Weekly Young Magazine from February 2016 to February 2021.

The story begins when the protagonist is forced to join a club as part of school regulations. He ends up joining the Magic Club, where his sempai is precisely what a club president shouldn't be; immature and with Performance Anxiety so intense that whenever anyone is watching her, she flubs the tricks she's doing every time. Later on, Saki-chan, a street performer who has a less than sibling-like relationship with her brother, joins. Hilarity Ensues.

Kodansha USA published the manga in English. You can find a preview of Chapter 1 here

. It can also be read on INKR on here

An anime adaptation by Liden Films aired from July 2 to September 17, 2019. You can see the trailer here