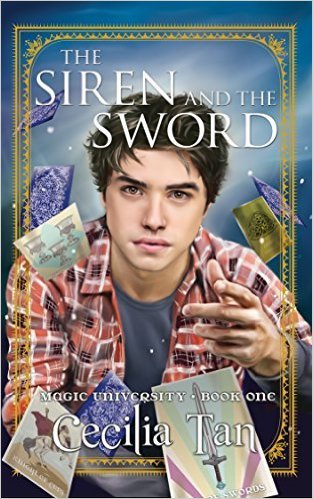 Magic University is a series of erotic/fantasy books about, well, a magic university. It's about a young man named Kyle Wadsworth as he arrives at Veritas, a magic campus hidden inside the University of Harvard, and only visible to those with The Sight. Completely unaware of the magical culture, Kyle must learn the ways of magic, as well as dealing with typical college problems.

Written by Cecilia Tan, and admittedly taken inspiration from Harry Potter, the series main focus is the The Power of Love manifested by the ways of passion and sex. The main conflict of the series comes from The Prophecy of the Burning Days, a mysterious event in which magical life suffers a huge cataclysm. Extremely NSFW.

It also includes the book Spellbinding: Tales from the Magic University, a collection of short stories featuring characters from the books, published first as an e-book in June 2011 and hard copy in July 2015.