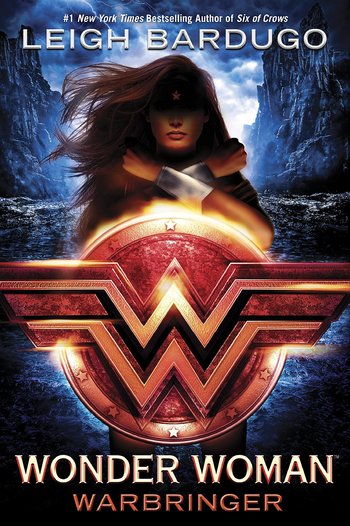 Diana, the princess of Themiscyria, the only amazon to have been formed from clay instead of being a heroic human warrior first, is desperate to prove her worth to the world, but especially the other amazons. However, when the chance to do so arrives in the form of human girl Alia Keralis, it turns out to be a bit more complicated than she thought.

Alia simply wanted to be normal for a short time, escaping her overprotective brother and the memories of her dead parents. However, it turns out that she is being hunted. After her ship is destroyed, she is saved by a strange girl: Diana.

Together, they find the reason why Alia's being hunted: She is the Warbringer, destined to throw the world into a devastating world war. To avoid this fate, they must travel the world and fight Alia's enemies together.

The novel is part of the DC Icons series, along with Batman: Nightwalker and Catwoman: Soulstealer.

This book has examples of the following tropes: