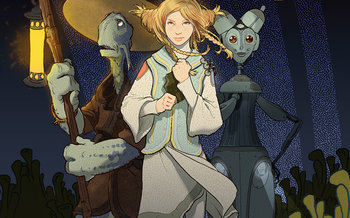 Rovender Kitt, Eva Nine, and MUTHR.
"Tony DiTerlizzi honors traditional children’s literature in this [...] space age adventure: one that is as complex as an alien planet, but as simple as a child’s wish for a place to belong."
—The official WondLa website

WondLa is a trilogy of science-fiction fantasy adventure novels written by Tony DiTerlizzi, one half of the fantastical driving force behind The Spiderwick Chronicles alongside Holly Black. The series was released between 2010 and 2014.

The series stars Eva Nine, a 12-year old girl raised by MUTHR (Multi-Utility Task Help Robot) in an underground sanctuary, where she is cast off from the great outside and has been for all of her life. Her only connection to the outside world is through holograms and a piece of cardboard with the fragmented words "wond" and "la". Her facility is then attacked by a hostile marauder, forcing Eva to abandon MUTHR and flee for her life to the outside world, which obviously comes with some difficulties. As Eva struggles to find other humans like her, she is driven by finding the answer to the ultimate question of what WondLa and the cardboard truly represent.