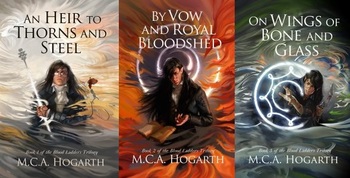 Morgan Locke, a college student with a mysterious wasting disease that is slowly killing him, discovers that he is actually an elven prince who was disguised as a human. Unfortunately the elves of legend are little like the decadent, amoral monsters he subsequently meets. The first novel, An Heir to Thorns and Steel was serialized on author M.C.A. Hogarth's LiveJournal page from 2013-2014, and the whole trilogy

Tropes included in this series

Alternative Title(s): An Heir To Thorns And Steel