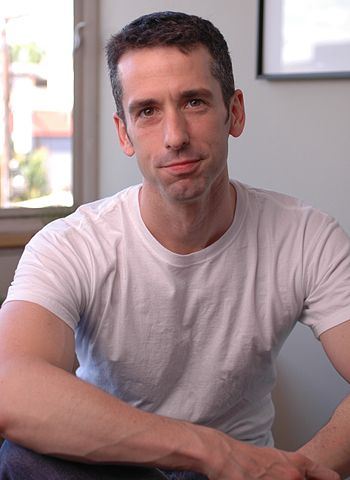 is syndicated in many alternative newsweeklies (its home paper is Seattle's The Stranger), and is featured online at the AV Club. Co-creator (with his husband Terry Miller) of the It Gets Better Project, which encouraged gay adults to create YouTube videos telling gay kids that it, well, gets better after they graduate from high school.

Recently he has been getting some press for coining the neologism "santorum." Back in 2003, then-Senator Rick Santorum compared gay sex to bestiality and pedophilia, irritating at least one Savage Love reader who wrote in to tell Savage that they should redefine Santorum's last name to mean something disgusting. Savage thought this was a capital idea, and so asked his readers for submissions, which were then submitted to a reader's poll. The definition (NSFW: the frothy mix of lube and fecal matter that sometimes results from anal sex) was then posted to a website www.spreadingsantorum.com which included the definition as well as news stories on Santorum. Savage then urged his viewers to link to the website from their own, an act which caused it to be the top result when searching for "Santorum" on Google until 2012 when the Google search matrix was changed. Thanks to Rick Santorum becoming a contender for the Republican Party candidate for the presidency of the United States, Savage's definition has become more well-known, referred to in the press as Santorum's "Google problem." In 2008, Savage ran a similar contest to coin a new meaning for the word "saddleback" (for the Saddleback Church, the megachurch run by Pastor Rick Warren), which came up with the meaning "to engage in unprotected anal sex in order to preserve one's 'virginity'".

Other terms coined by Savage (mostly used in his column) include GGG (Good, Giving, and Game—in essence being willing to consider the specific needs of one's sexual partner within reason so long as they do the same), DTMFA (Dump the Motherfucker Already, one of his most common pieces of advice), and monagamish (meaning a sexual relationship between two people where sex with other people is allowed, but they're not actively seeking it out like a more traditionally non-monogamous couple would).

Savage is frequently asked to comment on issues related to the LGBT community or sex. This does not mean he is necessarily liked by the gay community at large: thanks to his tendency to use somewhat flippant language, he has been criticized for being discriminatory to bisexuals, transgender/transsexual people, fat people, asexuals, Christians, people who don't agree with his views and people who wear leotards. When criticized, Savage generally has responded by... using somewhat flippant language. Some queer activists have also criticized the It Gets Better Project as being too passive: Savage's response is that participation or support of IGBP doesn't prevent someone from taking a more active role to fight bullying of LGBT teenagers, and indeed whenever Savage hears about a school or school district that he feels has been homophobic or too passive at preventing anti-gay bullying he generally posts the contact information for the principal or superintendent on his blog for his readers to send polite but firm notes of their disapproval.