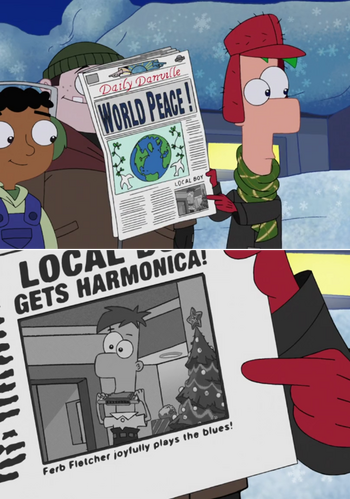 Whenever a character is shown a printed document and instructed to notice or read something important to the plot, they will accidentally only notice something completely different and irrelevant. Typically, Alice will show Bob a massive headline which tells of an important Macguffin Location or obvious Chekhov's Gun, only for Bob to get excited over the small shoe ad in the corner. Alternatively, Alice will push the paper in Bob's face but it's the wrong page, so Bob will inadvertently refer to some irrelevant article.

Since this typically involves someone to hold the Idiot Ball, expect a character to invoke this with a setup question, only to receive a comment on something totally unrelated.

Compare Worst News Judgment Ever for when the source itself misjudges information importance.