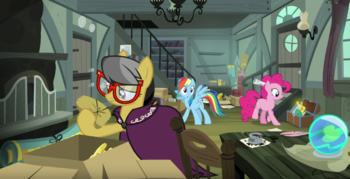 Daring, don't!
"I can't believe that the greatest author and secret pony adventurer of all time, A. K. Yearling... is retiring!"
— Rainbow Dash
Written by G.M. Berrow
Advertisement:

While Pinkie Pie is reading the local paper, Rainbow Dash is shocked to learn that the next Daring Do book will be the last as the author, A.K. Yearling, plans to retire. Knowing that Yearling really is Daring Do, this must mean that Daring Do will stop adventuring. Thinking this is a misprint in the paper, the two go to see Yearling, who confirms the story is true. Yearling shows them news clippings from her recent travels to Southern Equestria, all of stories complaining about Daring Do's adventures causing damage to their homes and stores. Yearling admits that while these accidents were part of her adventures, though she didn't mean to cause the damage and she has no way to tell these ponies that. Rainbow Dash and Pinkie offer to help repair her reputation and the three travel to Somnambula, a village near a desert in Southern Equestria where she had her latest adventure.

There, it is obvious that the villagers still resent Daring Do when her name is brought up, as they hold her responsible for destroying their statue of the legendary figure of Somnambula when Daring Do was fighting Ahuizotl. Later, a figure in a mysterious cloak continues to egg on these stories and accuses Daring Do of stealing the glowpaz gems that the villagers offer to the statue as part of their tradition. Rainbow Dash and Pinkie Pie try to stick up for Daring Do, telling the villagers how if Daring Do hadn't fought for them, they would have suffered a worse fate. However, the villagers note that their respect for Somnambula is of immense value: she had helped rescue a kind prince that had been helping to make sure his ponies did not starve during a great famine, but he had been kidnapped by a Sphinx. Somnambula solved the riddle of the Sphinx and took the Sphinx' challenge of performing a leap of faith to rescue the prince, restoring hope to the land. Their village's name and traditions are meant to honor Somnambula. Rainbow Dash insists that if Daring Do knew of how much Somnambula meant to the town, she would have respected the statue and glowpaz gems as well, but the cloaked figure continues to turn the villagers against Daring Do, and Yearling dejectedly walks away.

As Pinkie goes to see on Yearling, Rainbow Dash discovers that the cloaked figure is really Dr. Caballeron, and this was all part of his plan to ruin Daring Do's reputation and break her spirit. Before Rainbow Dash can warn her friends, Caballeron kidnaps her and takes her to the Sphinx's temple and ties her up. Pinkie catches sight of this, and warns Yearling about this. Yearling changes to Daring Do and the two set off to help Rainbow. They find themselves in a similar trap as Somnambula had to face, to cross a pit of green acid with no bridge to rescue Rainbow, with the temple's magic preventing Daring from flying, but Pinkie encourages her to take a leap of faith. To Daring's surprise, there are air vents in the pit that allow them to bounce across the pit and save Rainbow Dash.

They return to the village and see Caballeron and his mooks walking away with a large bag and they stop him; the bag spills open, revealing the stolen glowpaz. Realizing he's defeated, Caballeron reveals his whole plan in a fit of anger. The villagers chase Caballeron and his goons away, and cheer on Daring's name. Daring vows to never let Caballeron break her spirit like that again. Later, Yearling has unannounced her retirement, and under the Daring Do name has helped to repair the statue and other damage that happened in Somnambula, restoring Daring Do's name to them.