Film / Trouble with the Curve 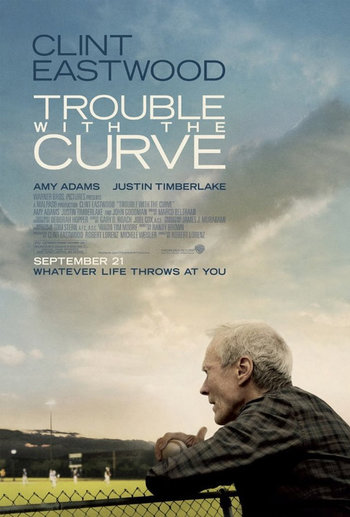 Eastwood plays Gus Lobel, a baseball talent scout for the Atlanta Braves. Gus's eyesight is failing, more of his job is being done by computers he doesn't understand, and he's badly estranged with his daughter, Mickey (Adams). He's given an assignment to determine whether it's time to put him to pasture, evaluating an up-and-coming prospect named Bo Gentry. In the course of the scouting trip, he's forced to admit to his failings, and tries to connect once more with his daughter. Also in the picture is Johnny "The Flame" Flanagan (Timberlake), a former player Gus had scouted who is now himself a scout for the Boston Red Sox... and who takes quite a shine to Mickey.

Trouble with the Curve provides examples of: