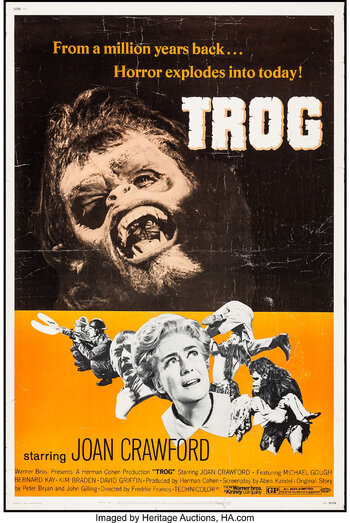 Yep, that's Trog.
"Now what can you really say about a movie where Joan Crawford, dressed in an immaculate beige pantsuit, hunts through a cave shouting: "Trog! Here, Trog!" to her pet troglodyte?"
— Roger Ebert, from his 1970 review

Trog is a 1970 film directed by Freddie Francis.

Three spelunkers in England find an unexplored cave. They find a stream, which they follow to a larger cavern—and then they find an ape man! The ape man kills one of the explorers and leaves the second a gibbering wreck, whom the third pulls to safety.

Cut to the Brockton Institute, where expert primatologist Dr. Brockton (Joan Crawford) treats the second spelunker, still incoherent with shock. Inspector Greenham of the local police thinks that the tale of a wild ape man in a local cave is a fraternity prank but Dr. Brockton is sure it's true. Dr. Brockton and the cops go into the cave and confirm that the ape man is very real! The good doctor shoots him with three tranquilizer darts, and after the third finally takes the ape man down, Dr. Brockton has him taken off to her research center.

Dr. Brockton sets about studying the ape man, whom she calls "Trog", short for troglodyte (cave dweller). Under her patient instruction, Trog learns basic commands and slowly begins to adjust to his environment. However, local businessman Sam Murdock (Michael Gough) hates the beast and will stop at nothing to see Trog euthanized.

Trog was the end of Joan Crawford's 45-year career in the movies, although she appeared on television a couple of times before her death in 1977. The making of it is dramatised in the FX series Feud.