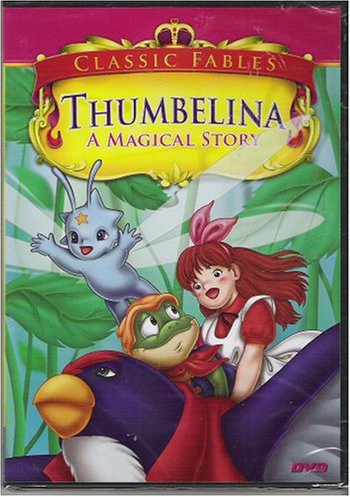 Thumbelina: A Magical Story (おやゆび姫物語 Oyayubi Hime Monogatari, lit. The Story of Princess Thumbelina) is a Japanese anime series produced by Enoki Films and adapted from the original Hans Christian Andersen fairy tale "Thumbelina" by Akiyoshi Sakai. It premiered in Japan on TV Tokyo on March 31, 1992 and ran for twenty-six episodes until its conclusion on September 30, 1992.

The series was edited into an eighty-minute film and released in North America on VHS by Starmaker Entertainment in 1993. In 2006, Digiview Entertainment re-released the Starmaker film to DVD.

The plot is as follows: Unable to control her mischievous young daughter Maya, an exhausted mother seeks the guidance of an old witch living on the edge of town. The witch gives this mother a magical copy of the fairly tale "Thumbelina" and tells her to read this to Maya. Later, when her mother falls asleep, Maya shrinks and is pulled inside the world of the book. A good witch appears and tells her that she is in her mother's dream world and that in order to return to normal, she must find a way to wake up her mother. To do this, she must travel to a far away southern land to talk to the Crystal Prince, who will help her reach home. During her journey Maya faces many trials and hardships; along the way she befriends members of the dream world, who band together to help her reach the land of the South.