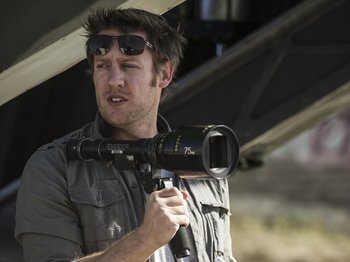 Neill Blomkamp (born 17 September 1979 in Johannesburg, South Africa) is a South African-Canadian director, best known for his first feature film District 9. After directing several commercials and short films, Blomkamp caught the eye of producer-director Peter Jackson thanks to his excellent work on Halo: Landfall, a trio of Halo short films taking place shortly before Halo 3. Blomkamp and Jackson, with the aid of Microsoft and Bungie, began working on a Halo movie, but the project failed to secure a studio willing to fund the film and was eventually shelved. As consolation Jackson offered to fund Blomkamp's next film, a fable about first contact and human prejudice set down in South Africa. District 9 earned a lot of media praise and success, which Blomkamp followed up with his next films Elysium and Chappie.
Advertisement:

He was also in line to direct a film in the Alien setting, which was greenlit after he teased concept art for the movie. Sigourney Weaver was signed on to return as Ellen Ripley, with Michael Biehn in talks to return as Dwayne Hicks and Ridley Scott was going to produce the movie. Unfortunately in 2017, Fox canned the sequel due to a lack of faith in the product and Blomkamp unable to write a script during its development. His fourth film, Demonic, was released simultaneously in theatres and on-demand on August 20th, 2021.

He is currently part of the independent film production company Oats Studios.

He is also distinctly One of Us, having worked on the original Halo, and says that he based the design of the character of Chappie on Briareos from Appleseed.

Recurring tropes in Blomkamp's films include: