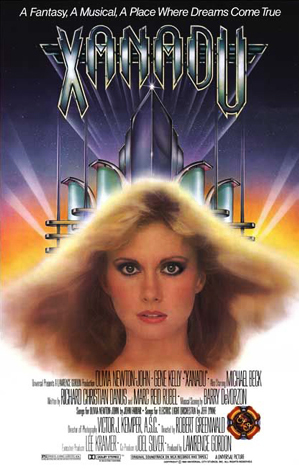 "Where time stops and the magic never ends."
"A place where nobody dared to go
The love that we came to know
They call it Xanadu
(It takes your breath and it'll leave you blind)

And now, open your eyes and see
What we have made is real
We are in Xanadu
(A dream of it, we offer you)"
—The title song
Advertisement:

What has Olivia Newton-John, Gene Kelly, that guy from The Warriors (Michael Beck), roller skates, lots of glowing blue people, all to an Electric Light Orchestra soundtrack?

The 1980 movie musical Xanadu is a story about a frustrated artist named Sonny Malone (Beck) who paints album covers for a living and is unhappy about it. By tossing some of his drawings into the wind, he somehow brings a painting on a wall of nine young women to life

and one of them — Kira (Newton-John) — finds and kisses him. Shortly after, he meets Danny McGuire (Kelly), a former big band leader. The two strike up a friendship and, with encouragement from Kira, make plans to convert an abandoned building (The Pan Pacific Auditorium) into a roller disco. Sonny and Kira, meanwhile, fall in love, with there being the slight complication that Kira is actually "Terpsichore" (turp-suh-KOR-ay), the Greek Muse of dance and choral singing, and was only sent to bring Xanadu into creation. Soon, she will have to return home, just as Xanadu will be opening.

The titular roller disco's title comes from the Samuel Taylor Coleridge poem "Kubla Khan" and refers to a province where Khan establishes his pleasure garden. Naming a movie about a muse with a reference to a notoriously unfinished poem that was conceived under the influence of drugs was a very ironic (and some might say appropriate) choice.

Widely panned by critics, it found a cult audience. It has now been adapted into a stage musical that doesn't even bother to hide how camp the whole thing is.

After seeing a 99-cent double feature of this movie and the Village People movie Can't Stop the Music, publicist John J.B. Wilson was inspired to create the Golden Raspberry Awards, aka "The Razzies". (Both were nominated for the inaugural Worst Picture Award, with Can't Stop the Music winning.)

"Your tropes will shine for you, Xanadu":