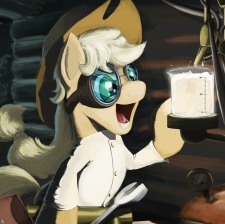 "In the wake of the Nightmare's most pathetic assault on Ponyville yet, Applejack is thrown into an existential crisis, despite her not knowing what the word "existential" means. So when a stranger named Stranger arrives in town, teaching a new way of coupling talent to power using complex machinery, she is quickly suckered in, along with everypony else. Now, it falls to the Most Dependable of Ponies to bring the resulting ruckus down to earth, but can even Applejack's legendary pragmatism stand up to the brain-fizzing horror that is… CONTRAPTIONOLOGY?"

A Crack Fic the way Crack Fics should be written, Contraptionology! is a finished fanfiction by Skywriter

, who also wrote Princess Celestia Hates Tea. It can be found here

, and it's prequel one-shot story Infernal Machines can be found here