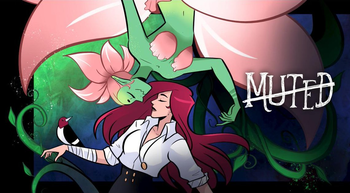 is a webtoons webcomic written by Miranda Mundt. It follows Camille Severin, a witch living in New Orleans who must summon a demon to perform a wish-granting ritual. She's been training for this her whole life, she can do the ritual in her sleep... The only problem is she doesn't want what her Aunt tells her to want, and she doesn't know if the ritual will go as planned. Her fears are quickly confirmed, as the summoning ritual quickly transforms her whole life, learning hidden truths about the world she lives in and about herself...

The webcomic provides examples of the following tropes: