Video Game / Sir, You Are Being Hunted 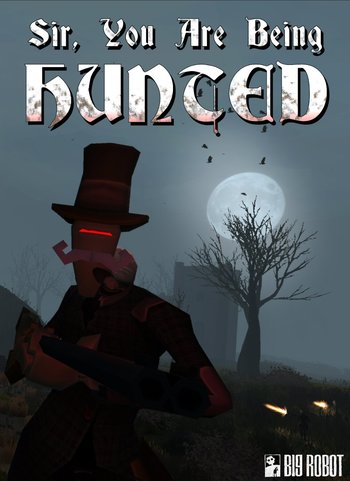 Sir, You Are Being Hunted is a procedurally-generated open world first-person Survival Horror / Survival Sandbox game by Big Robot. The Player (addressed solely as "Sir" or "Madame") has to survive on an archipelago of five islands of various biomes. Your task is to collect seventeen fragments of a "device" so you can escape the islands, all the while avoiding the various robot hunters that are trying to kill you.
Advertisement:

While experimenting on the islands of the Archipelago, something goes terribly wrong. The experiment goes haywire and you become stranded on the mysterious islands of the Archipelago. You have to find all the fragments and return them to the mysterious standing stones to teleport off the island, but you are not alone. Victorian-dressed, British Robots are hunting you down, trying to kill you before you escape. Nobody really knows where the robots are from or why they are hunting you, but they appear to live on the island. Your only goal is to survive, find all the fragments, and return them to the standing stones so that you can teleport off the island.

There are multiple types of robots:

A more serious, stealth-focused Spiritual Successor, The Light Keeps Us Safe, was released by Big Robot in October 2019.