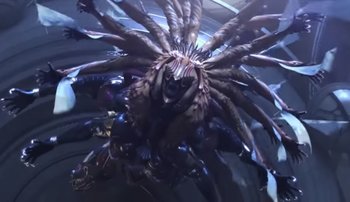 Keep in mind, this is one of the good guys!
Final Fantasy XIII. A chilling and blood-curdling installment in the series, just like its predecessors.
Advertisement:

You might want to grab your favorite blanket or teddy bear if you decide to play this. And now it's got a direct sequel that is even scarier.