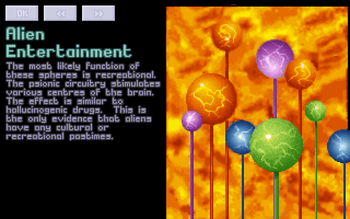 So does this mean X-COM fights an invasion of junkies from outer space?
Advertisement:

A trope found mostly in role-playing games or adventure games, where the world's population consists almost solely in communities and towns throughout the world. The hero/party will visit all sorts of towns, ancient civilizations, futuristic/technological utopias, war-ridden dystopias, small towns, metropolises... but generally, there will either be only one form of entertainment or one city where entertainment can be found. Many times, this will be the largest town (but not always), but you can expect that whichever city this can be found, and whatever the form of entertainment is, you will at some point be forced plot-wise to take a part in it.

The odd thing concerning this trope is that, usually, most everyone in the world enjoys the activity. This becomes even odder if the form of entertainment exists solely in one town in the whole world.

The major exception to this rule is that, because they're easy to design, most if not all houses will have bookshelves, implying that reading is a common pastime (never mind that high literacy rates are almost completely a modern trend, making them out of place in medieval-era worlds). Expect to run into Pamphlet Shelf if you examine them.

More often than not, where this entertainment happens will be the Minigame Zone.