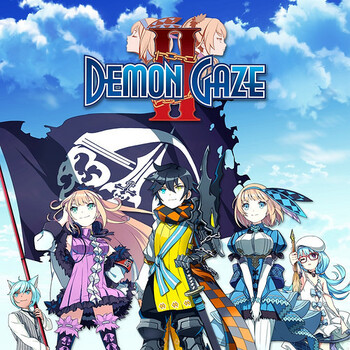 Demon Gazer. Lead us into the future with your eye. Light up the Asteria Revolution!
Advertisement:

Demon Gaze II is a RPG/Dungeon Crawler for the Playstation Vita and Playstation 4 created by Kadokawa Games. It was first released in Japan in 2017 and America later that year. It is a direct sequel to the first Demon Gaze with several characters and locations returning.

In this game, you take control of a young man (Default name: Signa) who awakens with no memories inside of a strange castle and is led by a strange girl named Peg to a device called the Astral Furnace that kills people and converts them into Star Power for use by Magnastar, the ruler of the city. After being saved at the last moment, Signa defeats Peg, the demon Pegasus, in battle, and absorbs her soul into his eye, turning her into an ally. Signa soon learns that he is part of the Asteria Revolution, aiming to overthrow Magnastar and free the city by using his own Demon Gazer and Star Power against him.

The gameplay is mostly identical to the first game: You create a party of five characters (including the protagonist) as you travel into a labyrinth to find and defeat the resident demon(s). This is done by searching out and capturing all the "Demon Circles" scattered across the labyrinth. Once all circles have been sealed, a demon will appear, who you must then defeat. After winning the fight, the demon will be sealed away by your Demon Gazer power, and then- in the biggest change from the first game- become the playable party members rather than hiring mercenaries from Stella's Place.

In addition, the game allows you to customize your party with Artifacts which give them different set of abilities that they might not be able to acquire themselves, as well as changing their appearances in the bath area at the inn. New skills and stat upgrades for each demon (and Signa) can be earned by upgrading his Likability with each one either by performing Maintenance or by giving each demon a private room.