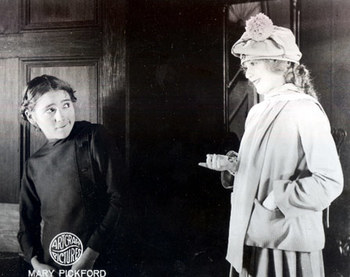 Two Mary Pickfords for the price of one!

"All unhappiness and world wisdom leave outside. Those without smiles need not enter".

Unity Blake is the most unpopular girl at St. Martha's Orphanage. She gets ignored and bullied even by the younger girls. One day, a woman visits and decides to adopt Unity. Her luck has seemingly changed for the better. On the other side of town, a young woman named Stella Maris lies in her bed; she has been paralyzed since birth. Her wealthy guardians have prevented Stella from learning of the miseries of reality by keeping her locked away in a room. Stella however is happy with her life and oblivious to the world outside of her mansion's doors. The two girls don't know each other yet but they'll be united by a series of unfortunate events.