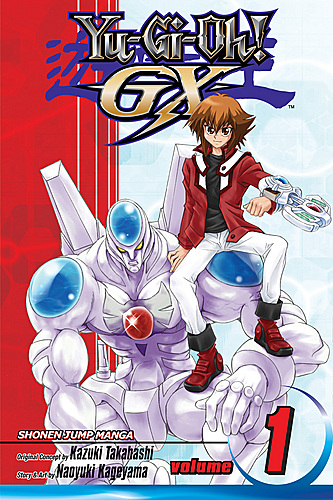 This page covers the manga. For the anime, see Yu-Gi-Oh! GX.

Judai Yuki is an ordinary student in Duel Academy, a school where aspiring duelists learn the secrets of Duel Monsters. Although he's a member of Osiris Red, the dorm lowest in the hierarchy, where students fear expulsion due to their low grades, Judai has a grand dream: to become the King of Duelists.

Published in Shueisha's V-Jump in Japan and Shonen Jump in the US, the manga is based on the anime that came before it. Although the main cast and setting remain largely the same, their development in the manga is quite different, as it covers none of the arcs the anime did. The manga also introduces a completely different set of antagonists and villains, following its own continuity.

The first two volumes of the manga cover everyday activities and spars within Duel Academy, exploring the relationships between cards that house spirits and their masters. However, as the series progresses, a darker presence seeking vengeance slowly reveals itself and attempts to infiltrate the school to obtain the spirits.

The manga is written by Naoyuki Kageyama and supervised by Kazuki Takahashi.

On June 21, 2014, a one-shot of the manga was released. Continuing where the original manga left off, the one-shot depicts the duel between Koyou Hibiki and Judai Yuki.