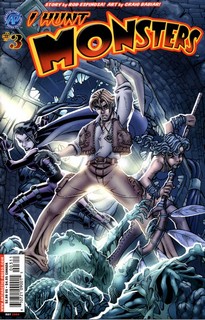 Huh...what do you suppose they do for a living?

A collaborative comic from the minds of Antarctic Press artists Rod Espinosa and Craig Babiar. IHM tells the story of William Warlock, fresh out of college and on the verge of starting of his life. However, he gets a note from his father to go to South Africa for an inheritance. Upon his arrival, he's whisked away by a sorceress named Aarna to a graveyard, where she explains is his duty to re-power a seal that keeps very powerful demons dormant. However, Will is understandably confused and dubious, and he takes his hand off the seal before the recharge is complete. The end result is all the monsters breaking free and flying off to wreak havoc in the world. Now it's Will's responsibility to find these monsters (helped along by Aarna, a vampiress named Delilah, and Will's high school friend Tayesha) and re-seal them before they bring darkness to the Earth.

Ran from 2004-2005 going into hiatus afterward, just as the comic was starting to move into an overarching story arc. Hasn't seen a new issue since then, as the creators have moved onto other projects.