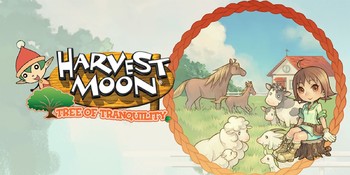 Harvest Moon: Tree of Tranquility was the first Harvest Moon (now known as the Story of Seasons) game to be released for the Nintendo Wii in 2007, which alongside Island of Happiness was part of the series' tenth anniversary.

The game is set in Waffle Island, which had the Mother Tree overlooking the whole island. However one day the tree died, and the Harvest Goddess had disappeared along with the Rainbows the island was famous for. Sadly this caused the island to fall in dark times.

You just so happen to arrive on the island so that you may start a farm, after hearing that it is a "ranchers paradise." However a storm hit your boat and knocked you out. This also let you dream of the Harvest Goddess asking for your help.

In 2009, Animal Parade was released which featured the gang from ToT, but in a different setting and similar plot.

Tropes associated with the game: