Film / A Friend To Die For 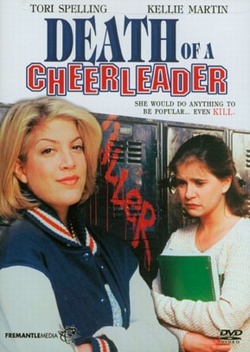 How much would you give to be popular?
Advertisement:

A Friend To Die For (also known as Death of a Cheerleader) is a 1994 TV movie that first premiered on NBC. It starts Kellie Martin, Tori Spelling, Valerie Harper, Terry O'Quinn, Marley Shelton and James Avery.

Angela Delvecchio (Martin), a sophomore at wealthy, high-achieving Santa Mira High School, wishes to rise through the ranks of the school hierarchy and win over the acceptance of Stacy Lockwood (Spelling), a popular queen bee at the school. Angela falls into Stacy's orbit, but as Stacy succeeds where Angela fails, the paths of the two girls will meet and ultimately clash, with fatal results.

and plays up a lot of the facts of the case for entertainment value (namely in painting the likeable and popular Costas as a mean girl). That said, the film was still well-received by fans and even spawned a remake 25 years later, this time actually named Death of a Cheerleader where Martin plays a small role.