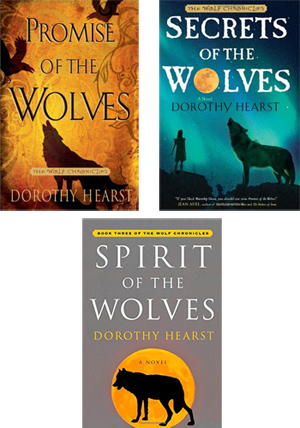 , which is from DavRian's point of view and takes place during the second book; The Wolf Pit

, which takes place immediately after the end of the second book; and The Atonement of Clendru

, a prequel about a ghostly character that appears in the third book.
Advertisement:

14,000 years ago, the promise mentioned above is what the wolves of the Wide Valley believe. Many thousands of years before their time, however, wolves and humans formed a bond with each other, and this changed them. The Ancients nearly killed both species, until the wolves made the promise.

Young wolf Kaala is a mixed-blood wolf, with her mother having taken a mate from outside the Valley. Her littermates are killed because of their birth, but her life is spared by a pair of Greatwolves - a large species of wolves that enforces the rules of the valley and speak to the Ancients.

Kaala's mother is banished from the Valley as punishment, and so Kaala must find her own way in the pack, growing up with the leaders' pups and trying to be accepted by the leaders. As she grows, she proves to be a strong, capable wolf, but in addition to her mixed blood they are uncertain about her because she was born with a crescent-moon-shaped mark on her chest, signifying that she is either very good or very bad luck.

Kaala does her best to be accepted by the pack, but as she learns about the humans, she feels drawn to them... With her adopted littermates Marra and Ázzuen, and a feisty raven named Tlitoo, Kaala begins to learn that perhaps wolves and humans being apart isn't the best way to go, and that perhaps the Greatwolves have some secrets of their own...