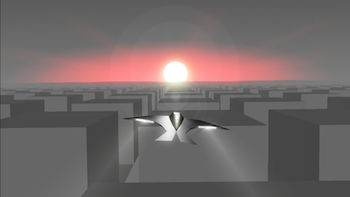 Aaaaahhhhhh! So fast!
Race The Sun is an intensely-fast Endless Running Game developed by a two-brother team Flippfly. It was originally released as Unity Webplayer game on September 2012, followed by a PC and macOS X release on December 10th 2013, then an October 21st, 2014 release for PS3, PS4 and PS Vita, a Wii U release on October 8th, 2015, and an Xbox One release on April 21st, 2017.
Advertisement:

The player controls a solar-powered aircraft dashing at Ludicrous Speed through a sequence of landscapes containing various hazards. Inevitable failure, as is usually the case with endless-runners, is achieved either by a head-on collision with an obstacle, or by running out of speed after one's solar energy is depleted. See, since the vehicle is solar-powered, it's not only important to stay out of the shadows of oncoming obstacles, but as the game description points out, the setting sun serves as the game's timer, and the player has to extend the timer by racing the sun, collecting boost pickups to catch up with the setting sun.

The game also features a Level Editor, as well as an interesting feature where the main level is rotated every 24 hours, giving a different struggle for the top of the leaderboard each day.

You can play the Unity version here

Race The Sun contains examples of: