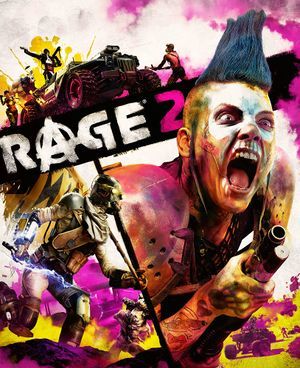 Been a long time coming
Now you better get running
And you better get ready to die!
"You see, part of growing up was watching everything get taken away from me. I stood by, did nothing. And now, I'm the last ranger of this wasteland, and there's only ONE THING LEFT TO DO!!!"
— Walker
Advertisement:

Rage 2 is the Wide-Open Sandbox First-Person Shooter sequel to Rage (2011), released on May 14, 2019. It is being developed jointly by id Software and Avalanche Studios, and published by Bethesda for PlayStation 4, Xbox One and PC.

In the year 2185, humanity’s numbers are dwindling. Ruthless and bloodthirsty gangs roam the open roads and the tyrannical Authority seeks to rule those who remain with an iron fist. You are Walker, the last Ranger of the wasteland. Robbed of your home and left for dead, you’ll tear across an unforgiving wasteland battling bloodthirsty gangs to find the tools and tech needed to take the fight to The Authority and crush their oppressive rule once and for all.

Originally announced in 2011, the game later fell into Development Hell following Bethesda's acquisition of id, in favor of moving id's resources onto what would become DOOM (2016). Following that game's release, however, Rage 2's development was renewed together with Avalanche.