Literature / The Wolves of Time 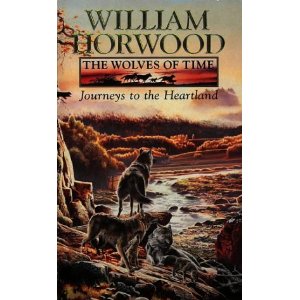 A duo of books written by William Horwood in 1995.

Long before the story begins, the god of wolves, Wulf, broke one of the ultimate rules of the gods: never mate with mortals. He falls from godhood and is doomed to be reborn and die as a mortal for 1000 years (known to the wolves as the Dark Millennium). A huge war broke out in which wolves from all over the world fought to be the chosen ones to guard the Heartland, the middle of which lies the Wulfrock, the birthplace of Wulf.

After much blood is shed, a wise Bukovian wolf gathers a select few who would be known as the Wolves of Time, wolves who would wait until the day when they can guide Wulf to return him to godhood.

The first character introduced is Bukovian Tervicz who is the one who makes the call that summons the Wolves of Time, then comes Nordic Klimt, who becomes the alpha male, Italian Elhana, the alpha female, Spanish Aragon, French Lounel, and Russian Kobrin. There is quite a lot of violence and also a fair deal of swearing and even sex scenes.