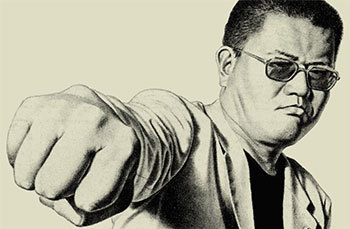 Turn every drop of your blood into ink!
Advertisement:

Ikki Kajiwara (梶原 一騎), born Asaki Takamori (高森 朝樹, September 4, 1936 — January 21, 1987) and also known as Asao Takamori (高森 朝雄) was a manga writer, novelist and film producer mostly known for being the Trope Codifier of the Hot-Blooded sports ''manga'' and the Fighting Series genres, two genres which, notoriously, "The Father of Manga" Osamu Tezuka stayed away fromnote They would eventually collaborate on the first Tomorrow's Joe anime adaptation, animated by Mushi Productions. His family includes his youngest brother, karateka and fellow mangaka Hisao Maki, and his second ex-wife, Taiwanese celebrity Pai Bing-Bing, whom he fathered his sixth child with, Pai Hsiao-Yen, who was the center of a sadly controversial incident

His career started in 1953 when he was 17 years old, when he submitted a boxing novel, Shōri no kage ni, to a shonen magazine. He would continue publishing novels and stories until the late sixties - however, his popularity would explode after writing sports manga in The '60s, most notoriously the enormously successful baseball manga Kyojin no Hoshi — it started his most successful era, where he managed to write simultaneously many classics for different publishers, like Tomorrow's Joe, Tiger Mask, Yūyake Banchō, Judo Icchokusen, Giant Typhoon, Kick no Oni, Niji o Yobu Ken or Akaichi no Eleven... And that's not even half of them.

The '70s would be the decade where karate-themed works would dominate his input, most notoriously the incredibly successful manga Karate Baka Ichidai, written with the consent of Kyokushin Karate founder Masutatsu Oyama, the series' protagonist and a personal friend of Kajiwara. However, disputes between Oyama and Kajiwara about issues like the manga's new protagonists or film adaptation income would gravely strain their relationship for life. It's also on this decade when Kajiwara would ultimately capitalize on his fame and contacts with wrestlers and martial artists to work as a match fixer, like in New Japan Pro-Wrestling's famous "style vs style" matches note During the late 70s-early 80s, Kajiwara tried to create his own wrestling promotion without success - that was the closest thing to accomplishing it. These would culminate on 1980's Antonio Inoki vs. Willie Williams match, considered in Japan by some to be the most important professional wrestling match of all time and one of their predecessors to Mixed Martial Arts.

Kajiwara's focus also expanded to cinema, as he went to be an independent film producer after seeing the success of many of his manga's live-action adaptations, like Bodyguard Kiba, Ai to Makoto or Karate Baka Ichidai: his films were mainly low-budget but highly successful karate/martial arts documentaries, and to a lesser extent, dramas written by himself.

However, by the late '70s-'80s, he was seen as an outdated authornote ironically, some of his most-known works were on a revival phase, namely Tiger Mask II and the Tomorrow's Joe anime continuation and his prolific output slowed down, until he was imprisoned in 1983 after a violent event that brought to light violent incidents of his past and made him an Unperson to Japanese medianote Kajiwara was arrested on charges of assault to the editor of Monthly Shōnen Magazine, although the police allegedly wanted him for drug-related charges, such as his stimulant addiction or dealing cannabis to close contacts. Following revelations included Kajiwara's forced confinement of Antonio Inoki or his manager Hisashi Shinma (over unpaid Tiger Mask royalties or a karateka's feud, depending on who tells the story), attempted assault at a hostess and a friend's ghostwriter, mistreatment to some artists (notably, to first Karate Baka Ichidai illustrator Jiro Tsunoda, who had a falling out — the Kajiwara brothers' response was to send him their scripts as late as a week or a day before the manga's publication), or his obvious ties with the Yakuza among others. Finally, in 1987, and with a much more relaxed output partly caused by his failing health, he died of pancreatitis while writing what would become his final works. His work wouldn't be critically reevaluated until the mid-'90s.

Notable artists influenced by him include Naoki Urasawa, Keisuke Itagaki, Takashi Shimada or Masami Kurumada (who was artist Kou Inoue's assistant during Samurai Giants), and he was even name-dropped several times on Bakuman。 He was also a huge influence on the Fighting Game genre on the '80s and early '90s, specially on the Hiryū no Ken, Street Fighter or the Fatal Fury series.

, searching for his name or under the Group Zero (グループ・ゼロ) category.