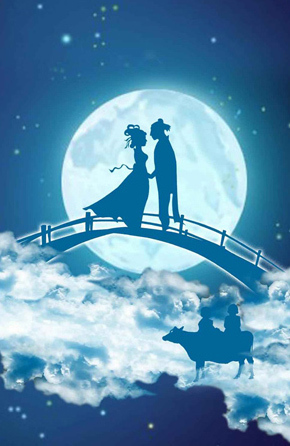 Tanabata (七夕) is the Japanese version of the Chinese Qīxì (七夕) festival, aka "the Night of Sevens". It was exported to Japan about a millennium ago during the time of the ('Northern' as we posthumously call them) Song Dynasty, or what is known in Japan as the 'Heian' period. Some people called it Tanabata and not Qixi for political reasons; Japan was a NATO-ally throughout the Cold War whereas Communist China did not align with NATO until the 1970s, meaning that the Anglosphere's first mass-exposure to the festival was through the Japanese, although it is still much more deeply rooted in Chinese mythology.

The festival is based on the legend of two Star-Crossed Lovers, Orihime (Zhinü) the weaver girl and Hikoboshi (Niulang) the cowherd, symbolized respectively by the stars Vega and Altair (both only visible in the northern hemisphere). Throughout the year they are separated by the river of the Milky Way, but for a single night each year - the seventh day of the seventh month of most of the Chinese lunisolar calendars - one of them is said to be able to cross the void and they can be together. The method of crossing varies depending on the storyteller, but the most popular and romantic way is by a bridge of birds who serve them out of sympathy for their plight - often magpies, which are lucky birds in Chinese mythology.

In China, Vietnam (where it's called Thất Tịch), Japan, and Korea (where it's called Chilseok), the festival is a cultural equivalent of European Christianity's Valentine's Day (which is still celebrated, but with a different cultural role; see the section on Japanese Valentine's Day and White Day here). In China's south (of the Yanzi river), they celebrate the day by eating mooncakes (among other things), but the Japanese generally celebrate this day by writing wishes on tanzaku paper and hanging them on bamboo, sometimes with other decorations. The bamboo and decorations are often set afloat on a river or burned after the festival (around midnight or on the next day). Japanese artistic depictions of Orihime and Hikoboshi often have them dressed in Chinese clothing.

Appearances of the Tanabata in fiction: