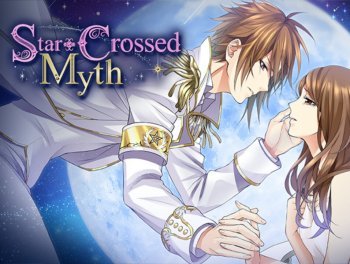 "Please... grant my wish again."
One night, you happen to notice a star sparkling in the heavens. Suddenly, the beautiful gods of the stars appear before you. These gods, however, have sinned.
Advertisement:

Star-Crossed Myth is a Visual Novel Romance Game by Voltage, Inc. for iOS and Android devices. On the night before the Tanabata festival, a young woman makes a wish on a shooting star - and suddenly finds herself confronted by six unbelievably handsome young men who claim to be gods of the stars.

These princes of the stars have been cast out of heaven as punishment for their sins, and now this otherwise ordinary young woman is the only one who can redeem them. Once her wish has been granted, however, the god that she's chosen will have to return to the heavens.

The gods have everything, except for love. But if a god falls in love with a mortal, how will their love story end?