Series / Crash Landing on You 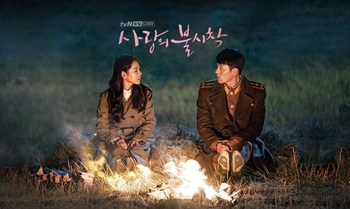 Crash Landing on You is a Korean Drama which premiered in December 2019. Outside of Korea it ran on Netflix.

Yoon Se-ri is an elite South Korean corporation heiress who started a successful fashion company after her estrangement from her family. She's so successful, in fact, that her father Chairman Yoon surprises everyone by tabbing Se-ri to succeed him as the CEO of Queens Corp., the family business. She accepts, much to the chagrin of her brothers Se-joon and Se-hyung, each of which had hoped to succeed their father.

She still has her own company to run in the meantime, however. One day Se-ri goes paragliding in a planned publicity stunt to advertise a line of jumpsuits. It looks cool... at least until a tornado blows through the area, catches Se-ri and her parachute, and flings her far away.

In fact, it flings her clear over the DMZ and into North Korea, which she finds out when she comes face to face with North Korean soldier Ri Jeong-hyuk (Hyun Bin). Captain Ri is a serious, dedicated (and tall and handsome) young man, one of the privileged North Korean elite. He was once a piano prodigy and was studying in Switzerland when the death of his elder brother forced Ri to come home and serve in the army. He tries to arrest her, but Se-ri is able to escape him and blunders into a North Korean village. Ri tracks her down again, and elects to hide her from North Korean authorities.

Meanwhile, some higher officers — including the corrupt Cho Cheol-gang — are involved in a shady business that raises Ri's suspicions. Conman Gu Seung-joon, "Alberto Gu", whom Se-ri rejected as an Arranged Marriage candidate, escapes to North Korea after swindling one of Se-ri's brothers. Seo Dan, a North Korean heiress and Ri Jeong-hyuk's arranged fiancee, is less than happy with Se-ri's appearance. To top it all off, certain members of her family are more than happy to see her gone...