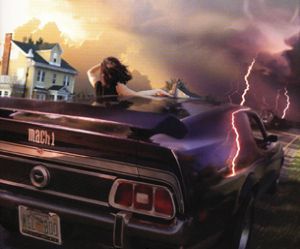 Weather Wardens is a series of Speculative Fiction novels written by Rachel Caine and published by Roc.
Advertisement:

They follow Joanne Baldwin, who is a sometime member of the Wardens. The Wardens are a global organization, headquartered in New York's United Nations building, whose job it is to protect mankind from natural disasters by stopping them or diminishing them. Joanne has never gotten along with one of the most well known and beloved Wardens, Bad Bob Biringanine — and when he dies under mysterious circumstances, Joanne is blamed for his murder. She flees with a Demon Mark growing in her, seeking the help of Lewis Levander Orwell, the man who turned his back on the Wardens and disapproves of their use of the Djinn as enslaved power amplifiers. Along the way she picks up a hitchhiker named David, who turns out to be more than he appears.

Joanne finds out more than she ever planned, gets in over her head and out again, falls in love, and repeatedly has to save the world — and herself — before it's too late.