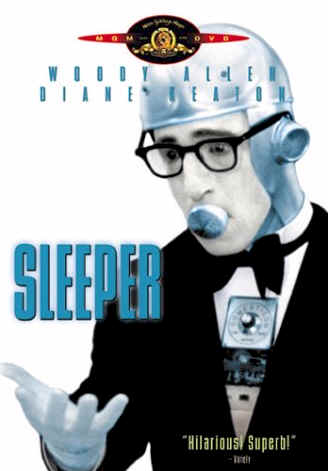 1973 film starring Woody Allen and Diane Keaton, wherein Woody Allen plays the role of Miles Monroe, a jazz musician who is accidentally frozen (with tinfoil for freshness) for two hundred years, waking in the year 2173. He is drafted by the scientists who wake him, as he's the only man in the world who hasn't been scanned and cataloged by the globe-spanning dictatorship of "The Leader".
Advertisement:

Miles disguises himself as a robot to escape his pursuers, falls in love with a future woman, gets brainwashed, wins the Miss America pageant, and topples the world government with the help of his new girlfriend, wacky disguises, and a steamroller.

Spoofing similar sci-fi and suspense films, future tech, and social standards of the time to great effect, this was Allen's piece

on how government control destroys creativity. It's based on H. G. Wells novel The Sleeper Awakes, and while it seems to be loosely based on the book at face value, it's just as satirical and insightful.